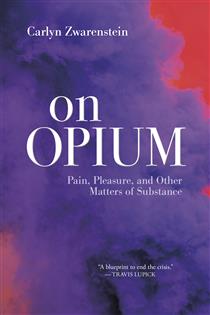 On Opium: Pain, Pleasure, and Matters of Substance is published in Canada by Goose Lane Editions. You can ask for it or order it online from your local Canadian bookstore or any of the giant usual suspects. If you’re in the US, you can get the e-book  here and the paperback from many independent as well as big box bookstores, or online right here. If you’re outside Canada or the United States, you can order it here or direct from the publisher and have it delivered. An audiobook is available worldwide. You can read reviews, interviews, even excerpts here (runs all the way to bottom of the page).

On Opium’s predecessor, a skinny, intense book about opioid painkillers and pain, was a Globe and Mail best 100 book of 2016. On Opium goes wider and deeper. From the publisher’s catalogue:

A groundbreaking meditation on pain, painkillers, and dependence from a prescription opioid user.

Her writing has been described as “measured,” “sensuous,” and “compelling.” In 2016, Carlyn Zwarenstein’s short narrative on pain made the Globe and Mail’s Top 100 Books. Now, she returns with a seductive dive into opioids and the nature of dependence.

North Americans are the world’s most prolific users of opioid painkillers. In On Opium, Zwarenstein describes her own use of opioid-inspired medicines to cope with a painful disease. Evoking both Thomas De Quincey and Frida Kahlo, she travels from the decadence of recreational drug use in past eras to the misery and privation of the overdose crisis today.

Speaking with users of prescribed morphine, illicit fentanyl, and smoked opium, Zwarenstein investigates uncomfortable questions about why people use substances and when substance use becomes addiction. And she exposes causes of drug-related harms: the debilitating effects of poverty, isolation, and trauma; the role of race, class, and gender in addressing pain; and a system of prohibition that has converted age-old medicines into taboo substances.

Through all of this, Zwarenstein finds hope. Drawing on solidarity between illicit drug users and people in pain; in a wise understanding of what humans need to be well; and in radical drug policies like legalization and safe supply, she lays out a vision of a world where suffering is no longer lauded, and opioids are no longer demonized.

About my first book, Opium Eater: The New Confessions (Nonvella, 2016):

“This book is so satisfying that at a slim 117 pages, you’ll be left wanting even more.” – Lauren Kirshner, Room Magazine

“An estimated 200,000 Canadians are addicted to legal opioid painkillers. Part memoir, part sociological study, Zwarenstein’s personal, easily digestible update to Thomas De Quincey’s Confessions takes us behind the headlines of overdose deaths to the myriad causes, which call for real political leadership. Urgent reading for an increasingly critical situation.”
– The Globe and Mail, 100 Best Books of 2016

Opium Eater: The New Confessions (Nonvella, 2016) has been taught on graduate and undergraduate university courses since 2017.

Media and reviews of Opium Eater: The New Confesssions